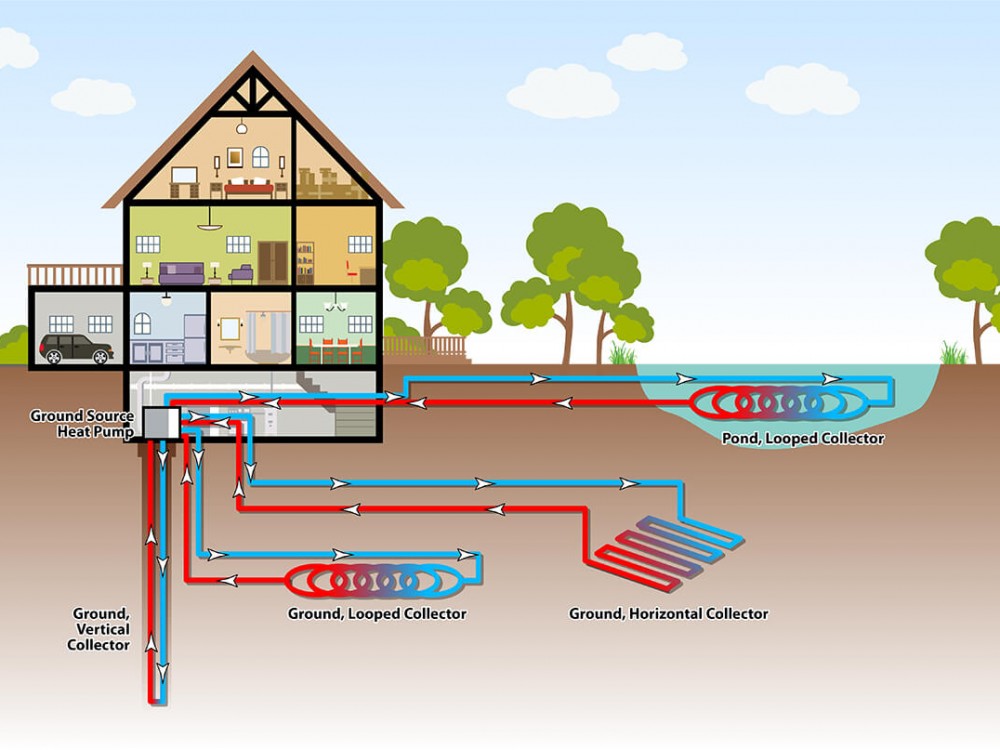 The principle of geothermal air conditioning is extremely simple. Based on the fact that a few feet below the earth's surface the ground temperature is constant at 18 degrees Celsius.

If we exploit the temperature difference between surface and subsurface, rooms can be heated in the winter and respectively refrigerated in the summer.  This can be done with the use of a geothermal heat pump.   The heat transmitted through a network of pipes which  are either  in a horizontal arrangement and low depth, or vertical arrangement where is necessary to make a borehole. A geothermal heat pump is usually around 25-30% of the energy yields, thus contributing significantly to energy savings. Geothermal heat pumps can also be used in hybrid systems with solar heating.

For the operation of open systems it is required an aquifer (for example, wells, lake, sea, river, etc.). An open geothermal system consists of two drilling wells (production or pumping water back into the aquifer where it came from)

Closed Geothermal Systems
Closed systems are separated into  horizontal and vertical.  A closed system is composed of plastic flexible pipes which either absorb or deliver the heat in the soil and a heat pump. The horizontal closed systems are the easiest geothermal systems to be installed, but they require. The pipes are placed  one meter below the ground in series or in parallel. The main source of energy in these systems is the radiance of the sun to the earth's surface. That's why we should not cover the spot of the headers with concrete or plants that create shading.The vertical closed systems are based on the temperature of the soil which in a certain depth remains constant throughout the year, despite the

weather conditions of the surface . In a vertical system, we place polyethylene or polypropylene pipes. Τhe geological composition and the physical-chemical properties of the soil are very  important to that system. The design of an atomic system is easy, but when we need to design a system in area that allready are installed such systems we need to pay special attention to  the heat capacity of the soil. Geothermal can work with various internal system installations (fancoil, radiators, hot water) and ideally witrh the undefloor heating.The combination of geothermal underfloor heating system has the highest efficiency and the  lower electricity consumption.